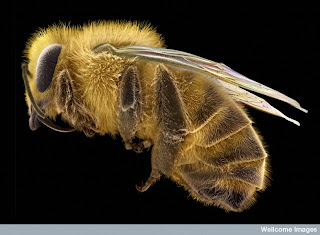 Wellcome library, known for maintaining a free collections of books, manuscripts, archives, films and pictures on the history of medicine from the earliest times to the present day, hosted the Medical Images Awards for 2011 recently. The judging panel included scientists who have to choose the best from around 400 images. The aim was to select those images which not only conveyed scientific information but had an artistic beauty as well.
Shown above is the scanning electron micrograph of a honeybee. The honeybee has a hairy thorax and segmented abdomen, a pair of double wings and three pairs of segmented legs. Each leg has a different 'tool' designed for a specific function to assist in the collection and transport of pollen to the hive for the production of honey. 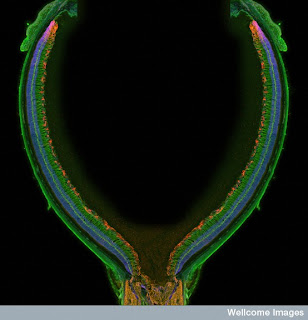 A confocal micro-graph of retina of one year old mouse, taken to study the fine neurological connections within the eye. 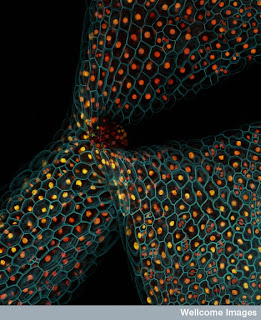 The above image won a special award. It is actually a confocal micrograph showing the expression of different fluorescent proteins in the stem of a thale cress seedling (Arabidopsis thaliana). Fluorescent proteins were used to stain genes. So when a specific color appeared, the scientists were able to identify the gene which expressed itself during growth of the seedling. 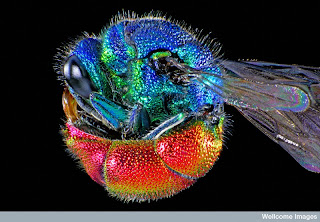 This photomicrograph shows an adult ruby-tailed wasp curled into a ball. 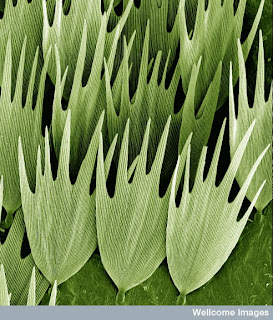 Scanning electron micrograph (SEM) of the scales on the wing of a Madagascan moon moth. 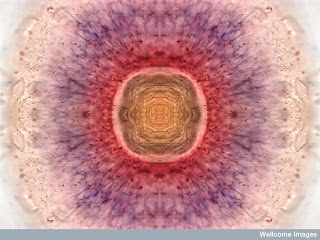 A photomicrograph showing the retina of a 3 day old zebra fish.
More details & pictures can be found at Wellcome Images Library.
Photos Technology