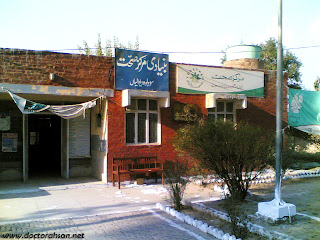 A one day free eye camp was arranged by our hospital in a Basic Health Unit (BHU), in Chakwal district of Punjab, Pakistan on 9th Dec,2010 & I was asked to be the man in charge. I accepted the offer whole heartedly, as I enjoy seeing new places, meeting new faces & helping others.
A total of about 150 patients were seen. Out of which 70 percent had simple refractive errors & they were un-noticed as they were either unaware of the problem or they didn't had the money to visit a hospital & buy glasses. They inculded mostly young school going boys & girls. Twenty percent of the patients had Cataracts, belonging to the age group of 45-75. Rest 10 percent had minor eye infections.

What I obeserved was that early school going kids were the main sufferes & they were mostly neglected because of either lack of attention by their parents or because of the economic conditions.
And it is these areas, i.e., Health & Education, we need to focus on to compete with other nations of the world.
Eye Health Pakistan