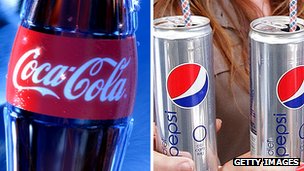 Coca Cola & Pepsi both contain a compound known as 4-methylimidazol which has been recently put by the Govt. of California in the list of carcinogens. The govt. of california has put its safe limit to be 29 micrograms while the survey of Washington revealed its amount to be 103 micrograms in soft drinks.

Now both Coca Cola & Pepsi are reducing its amount to be avoid being legally bound to put a label of being cancerous on their drinks.