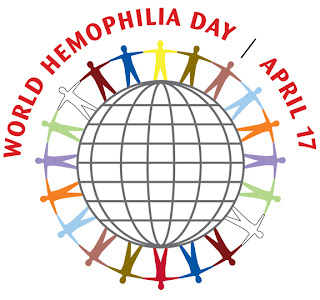 World Hemophilia Day was celebrated around the world on 17th April to increase awareness about this inherited disorder, which affects around 1 in 10,000 births every year. This year's theme was 'Be inspired, Get Involved in Treatment for All', telling affected people to inspire others by sharing their stories of success and getting everybody treated.
What is Hemophilia?
It is an inherited bleeding disorder, which affects only males. In this disease, the blood fails to clot after an injury & the bleeding continues for much longer.This is because of a clotting factor deficiency, which are needed for the formation of a blood clot after trauma. It is two types, Hemophilia A in which there is deficiency of clotting factor 8 and, Hemophilia B in which there is deficiency of clotting factor 9.

What are the Symptoms?
-Big Bruises
-Bleeding for longer duration than normal
-Bleeding into muscle & joints
-Spontaneous bleeding
How it is treated?
Treatment for hemophilia today is very effective. The missing clotting factor is injected into the bloodstream using a needle; bleeding stops when enough clotting factor reaches the spot that is bleeding.
Health