Sight for the Sightless 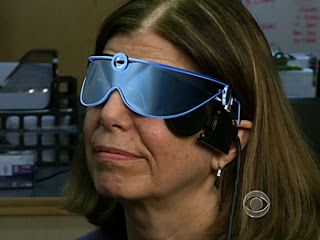 A new device has been approved in Europe which is offering sight to the sightless. The above picture is of Barbara Campbell, who lost her sight many years ago due to a retinal disease. She has been implanted with this new device, which consists of a small camera mounted on glasses and the images are converted to impulses that are sent to a transmitter on the side of the glasses.
The transmitter then beams the impulses to 60 electrodes that have been surgically implanted at the back of the eye. These electrodes bypass the damaged retinal cells and directly stimulate nerve cells connected to the visual center in the brain. She now sees a very crude image that has 60 points of light, compared to the millions of someone with healthy vision.
According to her, life has become again exciting for her, as she is able to see the light in her house, in the refrigerator, at the entrance to her building.


Although the device is expensive,i.e., around $10,000 but cheaper & better versions are expected to hit the market very soon in the future.