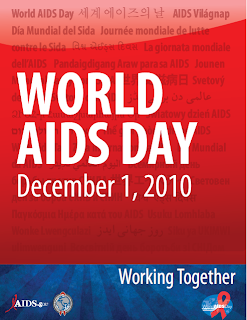 World Aids Day was celebrated on 1st Dec, 2010 to spread awareness about this deadly disease which, according to the survey of WHO in 2008, affects around 33.4 million people. An estimated 2.7 million people are newly infected & about 2 million people die of it every year.
What is AIDS!
AIDS is a disease caused by Human Immunodeficiency Virus, commonly known as HIV, which attacks the main defense barriers of the Human body. Once the defense barriers are broken, any infection can sabotage the victim.
Why are the Figures so High!
First of all, the people are mostly unaware of this disease & they come to know about when it has ravaged everything.
Secondly, Aids remains a social taboo to be discussed in our society because it is mostly considered to be spread by sex. But it is not always so....
How it spreads!
By having intercourse with a person previously infected with HIV.
Sharing syringes with IV Drug abusers.
By transfusing un-screened blood.
Sharing blades at the barber shops.
By the infected mother to the newly born baby.
How to prevent it!
By limiting yourself to your life partner.
Always transfusing blood which is screened for HIV.
By asking for a new blade at barber shop.
Most countries now deport back the job seekers to their home countries, once they are diagnosed with it. So, proper screening should be done at the airports, of the people returning back.
Always indulge in healthy physical activities like cycling, swimming etc & have a circle of good friends, so that one stays away from all the negative thoughts.
Diseases General